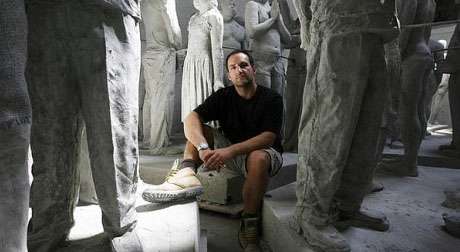 Lanzarote is in news again because the Underwater Sculptor, Jason deCaires Taylor was invited 2 years ago by the authorities of the Island to create a beautiful Underwater Sculpture Park in the Atlantic Ocean to attract sea creatures and create in time the much needed flora and fauna through his work.

Taylor is not only a sculptor, but also a fully qualified diving instructor and underwater naturalist with over 20 years of experience. He has also won awards for underwater photography, especially of the metamorphosing effects on his own sculptures mostly inspired by Terracota Warriors.

Taylor's first underwater sculpture park was in 2006 off the west coast of Grenada in the West Indies and listed among the Top 25 Wonders of the World by the National Geographic. In 2009, he again came up with a masterpiece, a co-founded a monumental museum MUSA (Museo Subacuático de Arte), off the coast of Cancun, Mexico, where is also currently based. His last work was in the summer of 2014 in the Bahamas, which happens to be the largest underwater sculpture park in the world, weighing over 60 tons and 5 meters high.

In Lanzarote the acclaimed artist with a crew of 5 are taking great care to build the sculptures for the Underwater Museum. The underwater park sketch shows that there will be a garden, a fountain and a fence. The statues will be built to last for 300 years, with a combination of architecture; and underwater atmosphere turning the lifeless statues into living and breathing coral reefs. The Museo Atlantico, off the coast of Las Coloradas in Playa Blanca is due to finish in 2015, with a budget of 700,000 €. The sculptures will be at a depth of 14 m and 150 m from the coast and within an area of 2,500 m, accessible only to divers and snorkelers (and fish). This project hopes to attract niche visitors who love diving and Lanzarote's cultural history.

More in this category: « Top ten things to do in Lanzarote on your next holiday Holiday to Lanzarote 2015, Book With H10 Hotels »