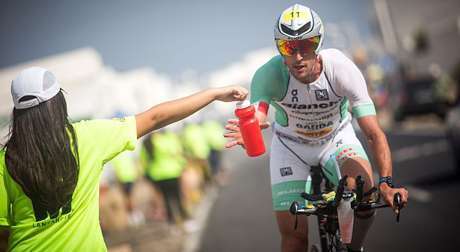 16th Iron man 2017, If you are holidaying in Lanzarote, come and cheer the racers on May 20th starting from Club La Santa or enroll as a volunteer before May 14th.

Iron man 2017 is the most awaited sporting championship on the exotic island of Lanzarote. It offers 40 qualifying slots to the Iron man World Championship in Kailua-Kona, Hawaii.

Iron man 2017 takes racers, volunteers and spectators on a journey through the beautiful paradise island. You will be mesmerized by the volcanic landscape and beautiful coastline under the intense sun with a forecast of 25°C. The athletes will be competing for three races - running, bike cycling and swimming.

If you want to participate as a volunteer, the Cabildo of Lanzarote through the Insular Sports Service headed by the counselor Patricia Pérez has asked interested participants to register through the link of the web page of the Insular Service of Sports before Sunday May 14th.

To be at least 16 years of age. If you are a minor, you must attach an authorization of the legal guardian that can also be downloaded through the above link.

A photocopy of the DNI, passport or NIE must be attached to the form.

Volunteers must attend athletes and clean up refreshment areas, among other functions, and will be coordinated by a person in charge of the organization.

The cycling competition volunteers will be in Uga, Yaiza, Mancha Blanca, La Caleta, La Villa, Los Valles, Mirador del Río, Nazaret and Masdache. Those of the marathon will be installed in the Avenida de Italia and the Hotel Sol in Puerto del Carmen, where three shifts will be established; As well as in the Institute and the restaurant Emmax in Playa Honda, the promenade of the Cabildo and the Delegation of Hacienda of Arrecife, where there will be two shifts established.

Whether you are going to race or participating as a volunteer or just a local or tourist spectator, being a part of Iron man 2017 is a privilege and an event you must not miss in Lanzarote.

More in this category: « Visit Canary Islands For Lovely Weather All Year Round Ironman Lanzarote 2017 Pre- Event And Event Schedule »