The Rising Tide, sculpture by Jason deCaires Taylor in Arrecife 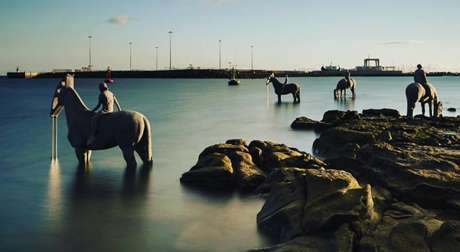 The Rising Tide, sculpture by Jason deCaires Taylor was temporarily installed on the intertidal zone at the foot of the building of the International Museum of Contemporary Art-Castillo de San José, Arrecife.

The Rising Tide sculpture by Taylor was previously installed by the artist on the River Thames foreshore at Vauxhall in London.

”The Rising Tide is a sculpture depicting four riders on their saddles, horses whose heads are oil drilling pumps , reflecting the great threat that hangs over the planet and especially on the seas and oceans", explains the Centers for Arts, Culture and Tourism (CACT) in its statement. The figures are drawn in concrete neutral pH. Each sculpture is 2.70 meters high and weighs 8 tons and are friendly to the ecosystem.

With this initiative, the CACT aspire to "make the works of Jason deCaires Taylor more widely known", the same sculptor who is developing the sculptures of the Museo Atlántico south of the island. At the same time, The Rising Tide is "intended as a promotional vehicle for the island and a dynamic element of space, since it is at a stunning location and will welcome all those tourists and visitors who come to the capital of the island by sea" he added.

The Rising Tide will be installed on the Bay of Naos, the CACT have indicated that installation will be done with the permission of the competent authority, the Port Authority of Las Palmas in this case. The work "is aligned on the lines of sustainable work by Jason deCaires Taylor and CACT, since the process does not require aggressive intervention or the use of harmful materials to the ecosystem, or anchors on the seabed" added CACT.

The Rising Tide was the work with which the British sculptor participated in the Totally Thames Festival 2015.

In Lanzarote, Jason deCaires Taylor in his workshop has been working in recent months on the sculptures for the Underwater Museo Atlántico and the Rising Tide sculpture to be installed in the Bay of Naos, Arrecife.

More in this category: « Papas Arrugadas, 1st of the 7 Gastronomic Wonders of Spain Starlight Experience, A Unique Nightout In Lanzarote »