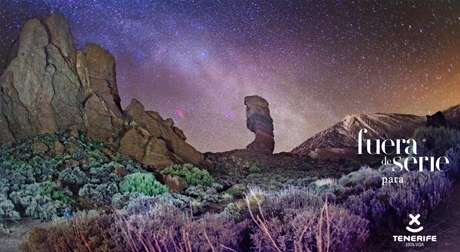 Enjoy a fabulous evening of Science, Romance and Gastronomy in Tenerife, Canary Islands on Mount Teide is one of the best things to do in Tenerife.

Rediscover the island of Tenerife like never before, grab the best deals on Flights to Tenerife and Book the best hotels near Mount Teide and enjoy a wonderful stargazing experience on Mount Teide. On the slopes of Mount Teide is an international astronomical observatory with world class equipment like solar, radio and microwave telescopes along with traditional optical night-time telescopes, managed by Instituto de Astrofísica de Canarias. You can also observe the Milky Way, the surface of the Moon, many constellations and even a shooting star from the observatory.

Mount Teide is 3,718-metre high and is the highest in Spain. The volcanic landscape, flora and fauna around Mount Teide and Mount Teide itself are part of Teide National Park and is a World Heritage Site by UNESCO.

Geographically Mount Teide is at an excellent location, very close to Ecuador and away from tropical storms, making it an ideal place for stargazing. Tenerife island can be called an island of 'Sunset and Stars'.

For an exquisite dinner and a stargazing experience, on an amazing and unforgettable journey with an expert guide. Begin this beautiful journey on board the Teide cable car, at the summit of the volcano savour a glass of sparkling from the highest vineyards of Spain or a hot chocolate and a very beautiful setting sun. The views from the top of the volcano is exceptional beyond words, a sea of ​​clouds radiating hundreds of yellow and orange tones, simply breathtaking.

After this visual spectacle, enjoy a wonderful dinner with cocktail served at the Teide station which includes all kinds of Canarian delicacies: gofio balls, wrinkled potatoes with mojo, skewered meat and fish, goat cheese, pumpkin pastry, banana fritters. .. an irresistible and interesting platter of specialties of Tenerife cuisine.

This 'Sunset and Stars' trip is one of the best things to do in Tenerife by Tenerife Tourism Corporation, indulge and make your Canarian holiday unique and unforgettable.

More in this category: « September AGH concerts and events Papas Arrugadas, 1st of the 7 Gastronomic Wonders of Spain »