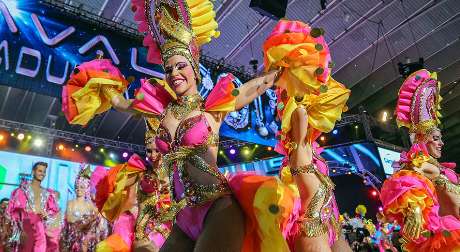 Carnival in Lanzarote is one of the most popular Lanzarote festivals in 2017 and will begin from 18th February 2017 till 26th March 2017, more than a month long celebration in different resorts of Lanzarote.

Check below the dates and themes of Carnivals in the popular resorts of Lanzarote.

Arrecife Carnival 2017: Dates: 18th February to 1st March 2017, Theme: Tribes of the World. Tribal music, dance and costumes will make sure you look the part and enjoy every bit of the festival.

Puerto del Carmen Carnival 2017: Dates: 2nd March to 5th March 2017, Theme: The 50’s and the 60’s, Puerto del Carmen is also celebrating 50th Anniversary. Join in with your favourite 50’s or 60’s outfit for a true celebration of the golden era.

Haria Carnival 2017: Date: 16th March till 19th March, Theme: The theme is still not chosen, the choices are Wild West or El Lejano Oeste, Bollywood and Roman Empire or El Imperio Romano. Once the theme is decided we will update this page.

Island of La Graciosa Carnival 2017: Dates: 24th March to 26th March 2017, enjoy Carnival on the fabulously beautiful island by taking the La Graciosa Express Ferry or go to La Graciosa on a Catamaranand take delight in the laidback and relaxing atmosphere of the island.

Now that you know the Lanzarote Carnival Dates and Themes 2017 celebrating with locals is a great way to enjoy local delicacies, traditional music, dances and parades. Check out this page for more latest updates of Carnival in Lanzarote 2017.

Since Carnival in Lanzarote is celebrated with fervour and enthusiasm garnering lots of tourists to the island, it is best to book flights to Lanzarote in advance and avail great discounts now.