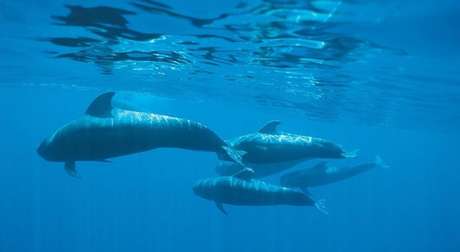 When they say that the Canary Islands is a temple of Cetaceo it is for this reason.

On the morning of this Thursday there was a unique experience for the visitors and tourists who were on the beach of Las Coloradas, in Playa Blanca, south of Lanzarote.

There was of a herd of pilot whales that were stranded on the shore. In the images, recorded by our friends Marina Rubicon Diving shows people agitating the water with their hands to keep moist cetaceans and pushing them offshore. Many of the swimmers made efforts to ensure that these small tropical whales continue to succeed in their journey through the waters of the Straits of Bocaina, which links northern and southern Fuerteventura Lanzarote. This video is an example of the large number of whales in the Canary Islands.

On Friday morning too a group of pilot whales were spotted in front of Island of Lobos at a depth of 50 meters by Alvaro Astica, which is very unusual. According to experts pushing back 15 pilot whales of that size is overwhelming as they are very difficult to handle, and the injuries of the beaching, stress and overheating can compromise the health of cetaceans quickly. However, these animals will end up stranded between the south of Lanzarote, the north of Fuerteventura and the island of Lobos. The authorities have asked the vessels transiting through the sea in this area to be very attentive and call 112 or on the phone 626649984 in case of the sighting of this group.

There is a possibility you could do whale spotting on this stretch of water, usually enjoyed on the exciting and popular ‘I Love Papagayo Catamaran’ excursion along with loads of fun activities near the Las Coloradas beach and Papagayo beach, which can be pre-booked online with our partners Excursions Lanzarote.

Don’t miss out on the unusual whale encounters in Lanzarote, whether you live here or are here on a vacation.