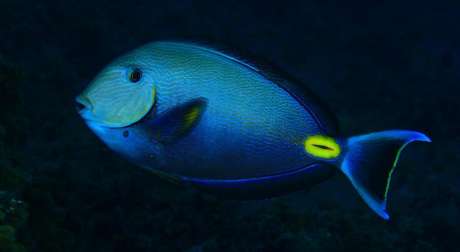 ‘Dory’, was seen in La Graciosa island waters. Get a chance to see blue surgeon fish when you book Scuba Diving in Lanzarote.

The forgetful fish was very popular in the animated Disney film ‘Finding Nemo’ and its sequel “Finding Dory’ in 2016.

The scientific name of the blue fish is Acanthurus monroviae is a tropical fish found in the eastern Atlantic ocean. The diver who saw the fish is Tanausú Motas, current runner-up in Spain and the Canary Islands for underwater photography who located the fish last Tuesday, whose presence is seen in the La Graciosa waters.

The Photographer was amazed that the appeared in less warm waters, such as the Chinijo Archipelago as it is very rare to see it. The photographer was submerged to photograph another fauna at a depth of eight and nine meters near Lambra Beach in north La Graciosa.

The appearance of the fish surgeon, added Motas, suggests that the biologists of the Network of Observers of the Marine Environment in the Canary Islands (RedPROMAR) of the Government of the Canary Islands, that the fish could have arrived next to some floating object making it a refugee, making a long journey from the coasts of the neighboring continent of Africa.

The waters of La Graciosa "shelter in a small space the greatest diversity of flora and fauna of the Canaries," said the photographer. In just one month he has portrayed 95 different species of fish around the eighth island at depths ranging from zero to fifteen meters, making it possible to enjoy this great aquarium, he said.

Book Scuba diving near Playa Chica in Lanzarote, an amazing underwater exploration and stop off along the way to see the different varieties of fish, it really is an experience that you will never forget!!