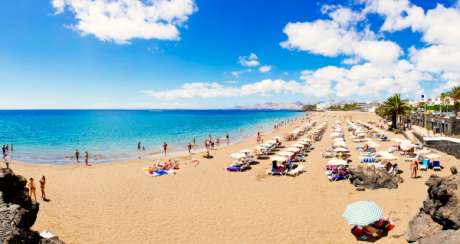 Temperatures in Lanzarote will rise slightly over the next few days, until Tuesday, August 22, when the maximums are expected to easily go above 30 degrees.

Until then according to the forecast of the State Meteorological Agency (AEMET), Lanzarote will see maximum temperatures around 30 or 32 degrees. But in the Island of the volcanoes, the temperatures will not rise as high as the ​​predictions in other islands such as the southeast of Fuerteventura or in the midlands of the interior of Gran Canaria, where it is expected that Thursday will see temperatures exceeding 35 degrees.

The skies of Lanzarote will remain clear today. Friday and Saturday will also see clear skies. On the other hand, the wind will blow from the northeast, moderate, according to the forecast of the Aemet, which has not given any weather warning for high temperatures in any island of the Archipelago.

However, the Ministry of Health of the Government of the Canary Islands is to activate the red sanitary warning in several municipalities of Gran Canaria (Agaete, Agüimes, Gáldar, Ingenio, San Bartolomé and Santa Lucía de Tirajana), by forecasting temperatures to exceed minimum threshold temperatures and go high until Wednesday 23 August, for which they have recommended the usual preventive measures of staying hydrated and take precaution of staying indoors during the day, especially in the afternoon.

If you are on a holiday in the Canary Islands and are worried about the rising temperatures, choose Excursions in Lanzarote, Excursions in Fuerteventura and Excursions Gran Canaria which do not require you to stay outdoors but rather let you enjoy the islands without exposure to the sun.