Weather in Lanzarote in April 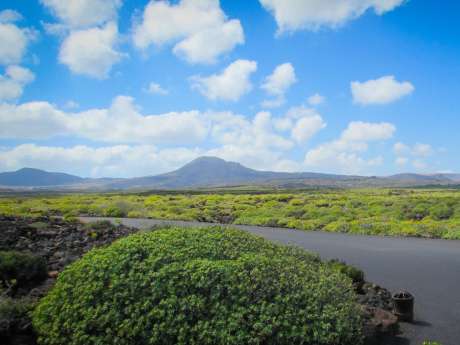 Weather in Lanzarote in April

The average temperature in Lanzarote in April

What time does the sunrise and sunset in April in Lanzarote

The sun rises around 7:30 am and sets around 18:00- 18:30 pm in Lanzarote in January. The UV rays are still powerful even if its cloudy in Lanzarote sometimes in April. The best way to see the sunset in Lanzarote is on a Lanzarote sunset cruise

Does it rain in Lanzarote in April?

Average rainfall in Lanzarote in April is around 1mm

Is it warm in Lanzarote in April?

Most days in Lanzarote are warm and you will see many people around the beaches and the pools. You certainly won't mind the odd cloudy spell every now and again, and most hotels and resorts are equipped with lots of fun and entertainment activities indoors. During the day the temperatures are warm around 22°C to 25°C, though sometimes there may be cool winds blowing, you definitely won't want to forget to take along your swimsuit, sunscreen and flip flops. Evenings can be a little cold, so carrying a fleece or a light jacket along is good, and a quiet stroll along the beach every night is awesome, and at night can get a little colder reaching lows of 14°C.

But is Lanzarote hot in April?

Let's face it is hotter than the UK and Ireland and you can still get sunburned so if the question is Lanzarote hot in April we say yes! it can be it depends on what you are used to. We certainly recommend packing suncream as the weather in Lanzarote in April can vary and while it may look cloudy the UV rays are still shining through the clouds. But come sun or cloud there are so many things to do in lanzarote whatever the weather.

With the weather in Lanzarote in April, what clothes should you pack?

If you are coming to Lanzarote in April then you should also consider packing some dressing up costumes as the island hosts the many Lanzarote carnivals in April.

How cold is the sea with the Lanzarote weather in April?

The average sea temperature in Lanzarote in April is around 19°C, it is a shock getting in but it will be warmer than most pools if you are in a hotel or apartment with no heated pool. April in Lanzarote is a lovely time of the year and you can even get yourself out on one of the many Lanzarote boat trips. If your pool is not heated fear not because in Lanzarote one of the two water parks opens all year round and their pools certainly take the chill off and you can have loads of fun on the slides and rides at the same time at the Playa Blanca waterpark Aqualava waterpark Lanzarote. They offer a bus service from Costa Teguise and Puerto Del Carmen also.

Things to do in Lanzarote in April

Like all months there are so many things to do in lanzarote and as April is a relatively quiet month although are plenty of events you will find most of the Lanzarote attractions will be peaceful. There will still be long waiting times at Timanfaya National Park so we always recommend taking one of the Timanfaya National Park tours as they will have priority entrance at the park. The Rancho Texas Park is of course open 365 days of the year and is a great day out for the whole family and there is also the Buggies Lanzarote tours which also have quads and trikes too and this is a great way to see the island.

Whether you are on the beach or inside the water, there are times that you would like to participate in some other activities and April has a few like:

- Puerto Calero April Fair: Sample the local cuisine or take a donkey ride or learn a craft in late April.

- El Chupadero Full Moon Party: If you are a party lover then this is the place you want to be at. Spring Duathlon: This is a sporty event held at Costa Teguise.The event includes running and cycling.

- Volcano Triathlon: This is a classic event organised since 1985 and participations by many World Champions. This is a challenging olympic distance triathlon where you get a chance to rub shoulders with the best European Triathletes. The three challenges for this race are 1,5K Swim Course, 40K Bike Course (No drafting) and 10K Run Course.