Weather in Lanzarote in January 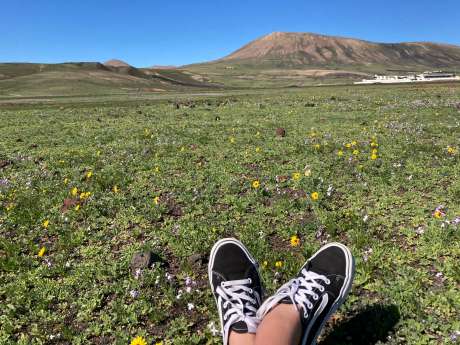 weather in Lanzarote in January

The weather in Lanzarote in January sees temperature between 13°C to 20°C. January is the coldest time of the year and you can expect an average of 2 days a month rainfall. However we know its very cold in the UK and most of Europe, so if you’re looking for a summer and beach getaway with 4 hours travel time and close to home, then Lanzarote is an ideal holiday destination for you.

Average temperature in Lanzarote in January

Average high temperature in the day in Lanzarote is around 20.7°C

Average low temperature in the night in Lanzarote is around 13.5°C

What time does the sunrise and sunset in January in Lanzarote

Does it rain in Lanzarote in January?

Average rainfall in Lanzarote in January is around 17mm

Is it warm in Lanzarote in January?

Most days in Lanzarote are warm and you will see many people around the beaches and the pools. You certainly won’t mind the odd cloudy spell every now and again, and most hotels and resorts are equipped with lots of fun and entertainment activities indoors. During the day the temperatures are warm around 20°C, though sometimes there may be cool winds blowing, but usually, a quick swim in the pool or the beach can be refreshing but don’t forget to take along your swimsuit, sunscreen and flip flops. Evenings can be a little cold, so carrying a fleece or a light jacket along is good, and a quiet stroll along the beach every night is awesome, and at night can get a little colder reaching lows of 13°C.

But is Lanzarote hot in January?

Let's face it is hotter than the UK and Ireland and you can still get sunburned so if the question is is Lanzarote hot in January we say yes it can be it depends on what you are used to. We certainly recommend packing suncream as the weather in Lanzarote in January can vary and while it may look cloudy the UV rays are still shining through the clouds. But come sun or cloud there are so many things to do in lanzarote whatever the weather.

How cold is the sea with the Lanzarote weather in January?

The average sea temperature in Lanzarote in Jan January is around 19°C, it is a shock getting in but it will be warmer than most pools if you are in a hotel or apartment with no heated pool. January in Lanzarote is a lovely time of the year and you can even get yourself out on one of the many Lanzarote boat trips. If your pool is not heated fear not because in Lanzarote one of the two water parks opens all year round and you their pools certainly take the chill off and you can have loads of fun on the slides and rides at the same time at the Playa Blanca waterpark Aqualava waterpark Lanzarote. They offer a bus service from Costa Teguise and Puerto Del Carmen also.

Things you can see in Lanzarote in January

New Year celebrations or Nochevieja celebrations by the locals start early in the morning. At midnight the new year is welcomed by performing the Spanish 12 grapes tradition of eating a grape per chime and drink a glass of cava.

Don’t miss Cabalgata de Los Reyes or Three Holy Kings / Wise Men parade, which takes place at 7 pm on January 5th, where three locals are dressed as the 'Three Kings', parading on camels around the streets of Arrecife, decorated floats follow them handing out sweets to crowds.

On 6th January the Epiphany, Día de Reyes or the King’s Day is celebrated like all Christians around the world. Bonfires are lit in some towns. Christmas gifts are also exchanged because this was when the Three Wise Men gave their gifts to Baby Jesus. To celebrate this day, traditionally the Kings’ Cake (Roscón de Reyes) is made with the usual baking ingredients with lemon and orange juice, brandy and orange flower water, covered with crystallised fruits and sliced almonds. Inside the cake, there is always a small gift and a broad bean. According to tradition, the person who gets the bean pays for the next cake!!

From January 17th to February 1st in 2015 the celebration of Nuestra Señora de Candelaria y San Blas in Tabayesco in Tias will happen. This is a religious festival with lively street parties, processions and displays of traditional Canarian wrestling. It is a great opportunity to learn about the local culture.

Other things to do in Lanzarote in January?

It is always good to hire a car and drive around the island, it is much cheaper too. Most of the attractions like Timanfaya National Park, Museums, sightseeing, caves and more can be visited easily but expect long waits as there are many people from the Spanish mainland here, we recommend taking one of the lanzarote tours. This way you will be able to skip the line and get straight in to see Timanfaya National Park.

If you are into sports then do witness or participate in some sporting events like :

- 4 Stage Mountain Bike : This is held from 25th-28th January at Club La Santa. The four courses are - Short Course, Long Course, Time Trial and XL. You must carry a license issued from your national Cycling Federation which is valid for that year. If you do not have these, you will be required to purchase a Spanish day license for each Stage at registration.

*It is always good to pre-register for these events*

More in this category: Weather in Lanzarote in February »